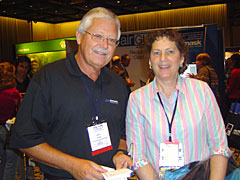 Many of Mike’s family and friends attended a reflective and wonderful service after his passing. Mike had so many friends throughout the country and world that could not attend, many who are still hearing of Mike’s passing. Below we would like to share excerpts of this service and invite you to share your thoughts about Mike.

“I would like to start off with some scripture. There was girl that I dated when I first moved to Arkansas and her and my dad had a pretty special bond. She gave me this prayer book and I had not opened the book until I lost my dad.”…

John 3:15 “That whoever believes in him should not perish, but have eternal life.”

“I know this father, I believe this father. Be with me today as I grieve, wipe away my tears and give me faith in these dark, hours for the victory is already yours.

…It would be easier to say what my Dad didn’t do and who he didn’t touch because then I could just sit down. A picture is worth a thousand words so just look at these pictures of my dad and his smile will explain it all…

…I want to start off by saying I’m sorry we have to be here today. I am shocked and surprised beyond belief, Mickey was my father and my best friend. My father was the most awesome man I have ever had the pleasure to be with. I cannot compare my dad to anyone else in the world; that would be impossible. I do not know anyone that ever said a bad word about him. There is a saying that before I would only use on woman, but I think it is fitting for my dad; When God created my dad, the mold was broken.There will never be another one. God tried to put the pieces back together when I was created, but a few of the pieces were backwards or missing. Maybe that will explain a little about me.

Only a parent bothers to lovingly tell a child that he or she has done wrong. So I want to thank my father for caring enough about me to tell me when I was headed in the wrong direction. Even when I’ve gotten into a real mess and ignored your warnings you still pulled me up and took me back to the place where I went wrong and started me on a new path. I appreciate your love even when correction is painful. Thank you for being a loving father to me…

…Almost all my friends here and across the country called Mike “Dad”. I think he had more adopted children than any other man. My dad never gave up on me even though a lot of times, a hopeless case. No matter how bad it got or how bad it was he was always, always positive; he was never down no matter what I did he patted me on the back and said you can try again son.

My dad loved to golf almost as much as he loved to dance. He would stay on the dance floor all night if he could find somebody to dance with and believe me he could really shake it. I did inherit his dance moves; I just didn’t get his stamina, at least not on the dance floor. My dad touched many lives; his spirit was strong and extraordinary. He had friends from here to China and that’s the truth. There will never be another Mickey, I will never meet anyone like him, I am just glad, I was blessed to be a big part of his life. I can honestly say if I had a choice for a dad I would pick him over and over and over again. I am so happy that God let me be here with him some of the last days of his life. My dad had a special bond with everyone, he touched everyone he met. He wouldn’t even have to talk, especially his grandson, Austin Michael. I am so thankful Austin got to be with my dad, even if it was for just a short time.

I love you dad and you will be greatly missed and hang on brother I will see you soon.

Thank you everyone for your love and support through this hard time.”

One thought on “In Loving Memory of Michael L. Otte”